So, struggling to teach your kids cvc words at home?

CVC words are more than just 3 letter words. Do you agree? I will tell you why. These 3 letter words forms base where kids learn blending of different sounds. So make sure to teach cvc words with fun with these amazing ideas.

Before starting, are you just making your kid learn the spelling?

I did the same before knowing Why cvc words are taught!

Reading and revising CVC words should go on untill kids master blending. In this simple coloring activity assign different colors to each of  ab,ag,ad,at .. two letter sets of vowel a. Then let your kid read each cvc word  and find, to which family word it belongs and color accordingly. 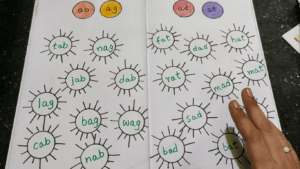 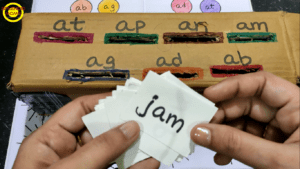 More you see more you memorize and remember. Same goes with CVC words. In this fun sorting activity kids have to sort the CVC word cards according to their word family group and drop them in the box. Make them read the word by blending the sounds before droping them into the box.

Drive through the CVC word

Take magnetic letters . Place each letter of the CVC word little apart for the car to drive through. Make the kid drive the car through the letters while sounding  them ,blending them to read. Stretch the letter sound till the car reaches the next sound. Last sound should not be stretched.

Have cvc word picture cards. Write one cvc word on paper and get your child to identify the cvc picture for it. To pick the correct picture your kid have to first read the letters, blend the sounds and read the CVC word.

CVC words are like stepping stones where kids learn how to read English. So always try to in cooperate fun ways to teach them.